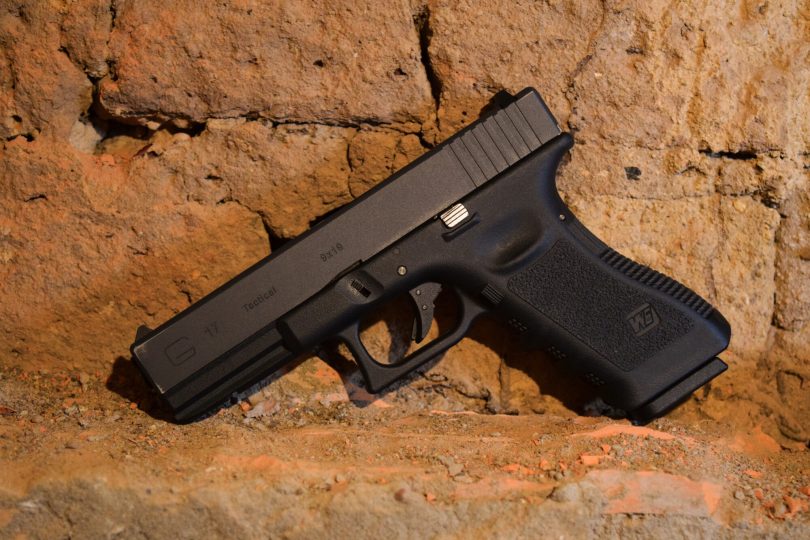 As 2022 comes to an end, you’re likely concerned about what’s happening around you in America. In 2021, gun violence rose sharply and with the inflation crisis and other problems, this will only increase for the foreseeable future.

While we need good policing to protect us, we must also take it upon ourselves to protect our property and families. The best solution is to get a decent handgun for your protection.

If you’re on a budget, you can definitely get a good quality $500 gun that’ll last you for several years.

Here are the best handguns under $500:

Kahr Arms is one of the most respected brands for handguns and is especially a great choice for new gun owners. The CM9 is a small pistol so you won’t feel overwhelmed by it especially if you need it for concealed or open carry.

It can fit into most holsters so it’s perfect for carrying around and the lightness makes it comfortable to carry next to your hip.

It’s one of the easiest handguns to shoot with and it’s easy to insert and remove the magazine. It also has in-built combat sights to make it easier to aim your gun.

Ammo for pistols and similar kinds of guns is also affordable and it’s no different with the CM9.

This gun usually retails for around $450.

Smith & Wesson is of course one of the best firearms brands and many gun owners aren’t even aware that you can get handguns under $500 from them.

The SD9VE is a basic handgun with a black grip and a silver metal frame. The textured grip is easier to hold and is great if you have struggled with the recoil or are a beginner shooter.

It’s also a much easier handgun to disassemble and clean. You’ll receive detailed instructions on how to care for and maintain your handgun. It’s one of the easiest to shoot and is great for taking to the gun range for target practice.

This gun usually retails for around $260.

This is a great handgun to consider as you improve your shooting skills and you’ll be pleasantly surprised at how affordable it is.

It’s also a lightweight gun so it’s perfect for carrying around. It only weighs around 15 ounces and can even fit into a deep pocket. This makes it great for a variety of different holsters whether for your hip, against your ribs, or in your pocket.

The one downside is that you’ll need to carry extra magazines and ammo with you at all times. But it makes up for this with the sights that make it much easier for you to improve your aim and marksmanship.

It’s got a light recoil so you don’t have to worry about much discomfort. It’s much easier to clean and maintain.

This gun usually retails for around $250.

Here’s another great gun from Smith & Wesson. The M&P 380 is one of the most reliable and durable handguns that you’ll likely ever come across.

It’s got a firm grip and you can also add either manual safety or grip safety to the gun. It weighs around 18.5 ounces and can hold up to 8 rounds in the magazine.

It’s also a semiautomatic gun which means that you don’t have to keep reloading as you fire the gun. You will have to release the trigger before pressing it again to shoot.

When you buy this gun you’ll also get a ton of accessories to enhance your experience. You’ll get a cleaning kit made solely for this gun and instructions on how to maintain it.

You’ll also get protective eyewear, hearing protection, and a bag to carry the gun in.

This gun usually retails for around $400. For less than $500 you’ll get one of the best kinds of guns along with great accessories.

This gun is often overlooked compared to some of the others on this list. But it has many advantages that both beginner and veteran shooters might miss out on.

It’s also an ambidextrous gun so it’s perfect for left-handed and right-handed persons, which is often rare when it comes to different kinds of guns. The grip isn’t the most comfortable, however, and does take some time to get used to.

However, it’s got a great sight option and has a three-dot system. This makes it easier to aim your gun in multiple areas for continuous shooting. This is another ideal gun to take to your local gun range.

But despite its few setbacks, this is a great gun for personal protection. It also has a lifetime service contract. This means that whenever there’s an issue with the gun you can take it to your local gunsmith to get it fixed. You can send it to the manufacturer if there are major issues.

This gun usually retails for around $330.

Mossberg is one of the most trusted manufacturers of different kinds of guns including some rather powerful shotguns. But it’s also a great brand if you’re looking for handguns under $500.

The MC 1SC is a 9mm handgun and is a great choice for concealed carry. It has a flat trigger and is one of the easiest guns to maintain. You can dismantle it within a few minutes and clean it with ease.

It weighs 19 ounces and can hold up to 7 rounds at a time. It’s got a carbon coat which makes it more durable and makes it less susceptible to damage from continued use.

This gun usually retails for around $340.

Those Are the Best Handguns Under $500

Now you know the best handguns under $500 and can decide which is the best option for your needs.

These guns are all great for open or concealed carry and many of them are also great for fitting into holsters. Keep an eye on what you wish to prioritize with these guns.

Some might have a poor sighting but excellent grips. Others might be heavier but also allow for continuous shooting.

If you have more questions about any of these guns and need our help, you can reach out to us.