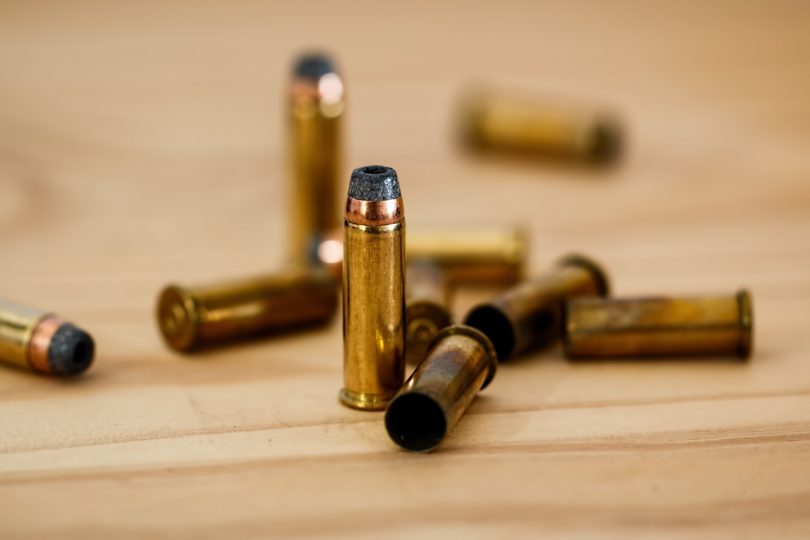 Loading a gun with ammo was a lot more complicated before B. Houllier, a gunsmith in Paris France, invented the ammo cartridge in 1847. Before this invention, the components of the cartridge were separated and loaded individually into the gun.

Before cartridges, it could take from 20 seconds to 2 minutes to load a gun with ammo, and that would be for a single shot. On top of that, one had to constantly contend with keeping the powder dry and not losing the ram.

If you’ve ever wondered about firearm ammo basics and the various components of an ammo cartridge, read on to learn what goes on, and why, inside a cartridge when you pull the trigger of a gun.

Cartridges come in varying shapes and sizes, materials, and types of primers and propellants used.

The case holds the projectile in place at the neck, the propellant underneath the projectile, and a primer in the base. The case must be strong enough to withstand the pressure (up to 80,000 PSI) of deflagration (rapid burning) of the gunpowder without cracking or exploding.

Cartridge cases are generally constructed from brass, but some are made of steel. Brass is economical, strong, and can be easily hardened. Shotgun cases, however, are mainly made of plastic.

The size of the case gets determined by how much gunpowder (measured in grains) the bullet specification requires and by the size restriction imposed by the magazine the bullets fit into, or the chambers in the case of revolver pistols.

The projectile is typically made from lead-antimony alloy. Full metal jacket bullets are made of lead encased in a jacket of steel. Another type of projectile is hollow points, which have the center hollowed out so that the bullet explodes more easily into shrapnel inside the target.

You will notice that most pistol projectiles have a blunt top, whereas rifle projectiles are pointed. The blunt-nosed projectile imparts the maximum amount of energy to the target at close range. The pointed rifle bullet explodes deeper into its target (think deer and bear) for a cleaner and more sure kill.

In the past, guns used black powder to fire projectiles, but its corrosive nature would cause damage to guns over time. Modern cartridges use a solid fuel instead of an explosive. It’s called smokeless gunpowder.

Single-base gunpowder is made from nitrocellulose. Double-based gunpowder adds nitroglycerin to the mixture.

Most gunpowders also contain graphite to make them smoother so they flow through funnels for loading cartridges. Other chemicals get added to make gunpowder moisture resistant and to cut down on muzzle flash, and stabilizers are added to give the propellent a longer shelf life

Pistols and shotgun shells tend to use flake (which has a large surface area) for faster burn rates.

Rifles use round or cone-shaped grain sizes for the slower burn rates needed to continue propulsion through long rifle barrels.

Bullet weight often determines the size and type of the grain as well. A heavier bullet requires a slower-burning grain for the longer propulsion needed to move the larger mass at the desired speed.

Gunpowder does not explode, but it is flammable, yet it will not ignite from the strike of a gun’s firing pin. To burn, it requires an exploding primer to provide ignition.

The primer has been 800 years in the making, advancing from matches to percussion caps, to primers using fulminate of mercury, and lastly to primers using lead styphnate, barium nitrate, and Tetrazene. These three ingredients act as an initiator, an oxidizer, and a sensitizer.

Components of a Primer

There are two basic primer designs: Boxer and Berdan. While they differ slightly, they use the same components. The Boxer method has the advantage of being the best of the two designs for those wanting to reload cartridges.

A cup holds the primer parts and chemicals. An anvil inside the cup strikes the primer ingredients when hit with the gun’s firing pin. The explosion in the cup propels hot gases through a primer vent and into the midst of the gunpowder in the main part of the cartridge.

These special types of primers reside in the rim of the cartridge. This method is used in low-powered cartridges such as the .17 and .22 caliber cartridges.

Shotgun cartridges vary in the types of loads they carry, from a single giant slug to tiny BBs called birdshot. Even though there are many different kinds of shotguns, they all use the same cartridges.

They employ a primer similar to the Boxer design, which ignites gunpowder surrounded by a “wad.” The wad sits between the primer and the projectiles. When the primer gets struck, the gunpowder propels the wad against the shot and out of the top of the cartridge and into the barrel of the gun.

The wad provides an even surface for the gunpowder to compress against. Otherwise, the gases would hit the shot pellets with uneven force and dispel too much energy.

An ammo cartridge appears simple from the outside, but a lot of innovation went into making it possible. It took a millennium from the creation of black powder until cartridges were developed as we know them today.

Think about ammo basics as you load up your gun, considering all that went into making it possible to place a self-contained cartridge into a chamber, then pull a trigger and hit a target with a high degree of accuracy, and then do it again in under a second.

When you are ready to purchase ammo cartridges, click on the following link and we will help you find a gun shop anywhere across the USA where you can stock up on the right ammo for your gun.