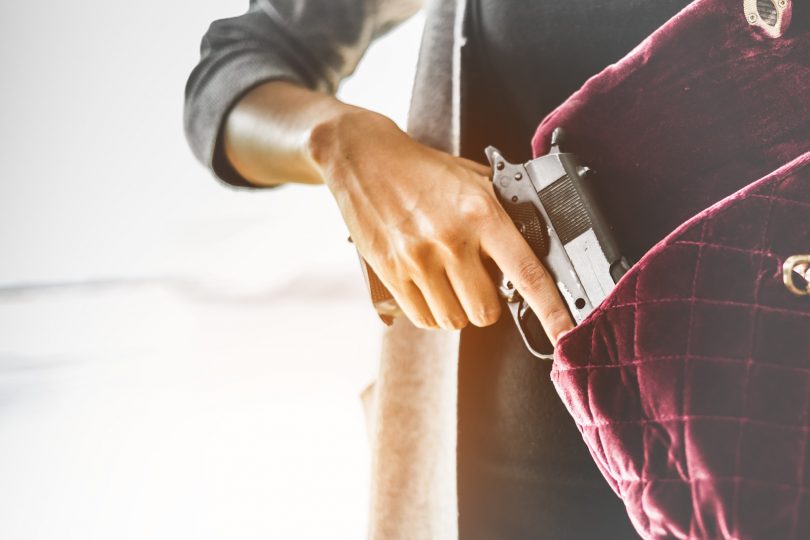 The debate over gun laws has been raging for decades, but every state in the Union currently has some form of concealed carry laws in place. Though the odds of someone murdering you are astronomical (1 in 16,000), you can never be too careful.

If you’re planning on buying a gun for concealed carry and self-defense, it’s best to study the laws of your state. This will help you get through the process legally.  The penalty for unlawful gun possession can be a year in prison and a few thousand dollars in fines, so it’s vital that you follow the law.

We’ll offer our own advice and list a few candidates for the best concealed carry gun in this article.

It’s also a revolver, which makes it somewhat unique among modern handguns. Since the 1980s, the amount of revolvers purchased has dropped, and now the vast majority of handgun owners have magazine-fed pistols rather than revolvers.

One of the main reasons this gun isn’t currently banned in its default form in any state is because it’s a revolver. Many of the current laws applied to pistols involve magazine capacity, and revolvers get around this because it is impossible to load more than a few rounds. The Ruger LCR, for example, can only hold five rounds.

Two of the most iconic names in firearms are Smith and Wesson, and the Shield might be some of their best work. This weapon takes concealing and carrying very seriously, clocking in at roughly a pound and a half and boasting a 3.5-inch barrel.

The Shield is also designed to be simplistic and easy to use, making it perfect for those who would otherwise be at a disadvantage when defending themselves, such as the elderly or those with disabilities.

Some models of the Shield come with a useful feature known as a thumb safety. For those new to the world of firearms, a thumb safety is a button located right behind the trigger, near where your thumb would be when holding the gun.

Pushing that button through to the other side turns on the safety and keeps the gun from firing. Pushing it back turns the safety off again.

The most remarkable thing about the Sig Sauer P365 is its size. Weighing in at a little over one pound, this weapon doesn’t trade function for convenience. It comes standard with a 10-round magazine, but you can upgrade it to a 12-round magazine if you wish.

Keep in mind that opting for the 12-round magazine will make the weapon illegal in seven states, eight if you count Washington D.C. There are a few downsides to this weapon, the biggest being that the trigger can be sensitive, and the aiming system has a bit of a learning curve.

The gun is still powerful for its size, and it does come with a tough grip and night sights, which add control and accuracy.

You do have the option of modifying an AR-15 into a pistol, but this comes with a lot of pitfalls. Between the legal issues surrounding the AR-15 and those surrounding handguns, you will need to walk a very fine line.

The main point to remember is that things designed to fire from the hand count as a pistol under most laws. Meanwhile, anything firing from the shoulder is a rifle. This means that getting rid of the stock is the main step to converting a rifle into a pistol.

That’s not the only modification you need to make. You also need to make sure that the barrel length is between 16 and 26 inches long. Otherwise, you’ll have to pay a special tax.

Also, AR-15 pistols are quite large and look a bit like something out of Star Wars. Even if you can get an AR-15 modified into a pistol, it won’t be practical as a concealed self-defense weapon.

Another amazing lightweight gun, the Glock 43 weighs about a pound. The Glock brand built its reputation by being reliable, and the 43 continues this legacy.

Easy to learn, easy to use, and very easy to hide, this firearm might be the best concealed carry gun on the market. It also comes standard with a six-round magazine, so you won’t run into any legal trouble.

The 43 was a hit when it came out, and it served as a milestone in the company’s history. It was the first time Glock had created a single stack 9 millimeter pistol.

Single stacked refers to a gun that contains a single column of ammunition in its magazine, rather than two. This makes the gun thinner and, by extension, easier to conceal. Glock’s customers had been demanding this for a while, and Glock delivered big time.

The Best Concealed Carry Gun to Own

The best concealed carry gun is hard to determine, because every gun owner is going to have different needs and preferences. Those who are buying or using a gun for the first time may want to go with a Glock 43, while someone with kids in the house might prefer an S&W Shield, with an easy-to-use safety.

If you want more information and advice about firearm ownership, please visit our site. If a handgun isn’t your thing, or if you’re more interested in hunting or sport than self-defense, read up on the various types of rifles.